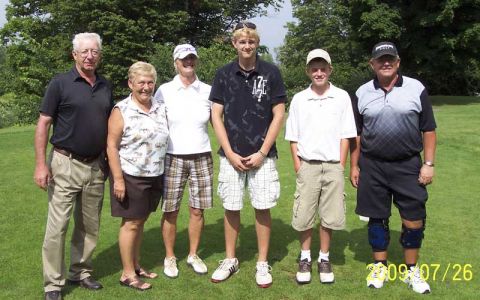 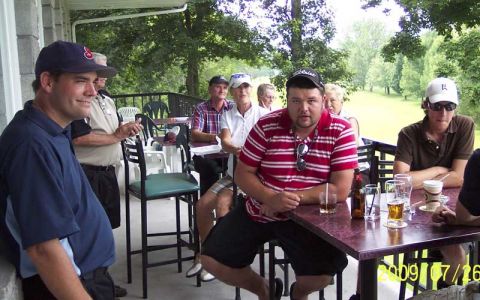 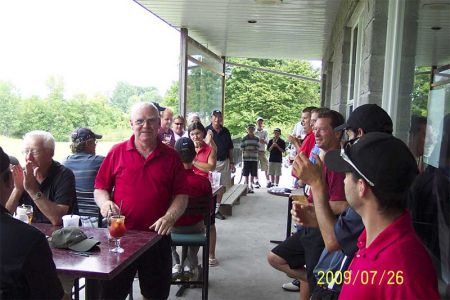 The two-day tournament that everyone either looks forward to or dreads for the summer took place this past weekend at The Braes. The men’s and ladies’ Club Championships were up for grabs, and with both of the defending champions out of the picture, it was anybody’s game to win, or lose. Both days had rain and thunderstorms in the forecast, but gorgeous skies prevailed on Saturday, and the scores were reflective of that. At the end of the day, a total of nine players posted scores in the 70’s, with only three strokes separating the leaders from the bulk of the contending field. Bill Dean, Nick Grenier, and 2007 Champion Luke Simons were tied at the top with their respectable scores of 76. In the ladies side of the event, the defending Senior Ladies Champion, Sharon McClelland, was leading the field with her score of 88. Sitting just one stroke back were Rhoda MacFarlane and Natalie Meulenbroeks, both of whom rode solid rounds, and hoped to take home the title on the second day.

Sunday’s round was again plagued with a terrible forecast of thunderstorms, but the angels held delayed their bowling game to allow for some great golf to be played. The ladies championship, which began as a tight race, turned out to be a routine victory for the steely Sharon McClelland, whose final round 86 clinched an eight stroke victory over Bonnie King, who posted a second round score of 90 to take the Senior Ladies championship. The next closest lady was a whopping twelve strokes back of McClelland.

The men’s division started off as a close battle between Dean, Grenier, and Simons, with all three players being even par after the first three holes. It seemed like a game where whoever blinked first would find himself behind the eight-ball. The first blink of the day belonged to Grenier who stumbled to a triple-bogey 8 on the tough fourth hole. Simons then bogeyed the fifth to fall a stroke back of Dean, but made up for it with a nice birdie on the relatively easy seventh hole. After both players pared the tough eighth hole, it looked as if the battle was on. Dean however hit a rough tee shot on the ninth, then ended up incurring a one-stroke penalty when his shot hit Grenier’s power cart en route to an 8. Simon’s calmly rolled in a 30 foot bomb for birdie to make the turn in one-under par, while Dean and Grenier both finished the front nine at four-over. Simons carded his fourth birdie of the round with another lengthy putt on the tenth hole, and ended up making another on the fourteenth. He made on bogey coming home and finished the day with an incredible round of two-under par 70, to win by 9 strokes over Dean.

The Seniors Division was a fairly tight race as well, with Ray Medhurst riding his first-round 80, to take the title by a couple of strokes over Harold Andrews. The Super Senior Division was a fairly easy victory for Fred Jespersen, who won by several strokes over his nearest competitor. A compelling story as well was in the junior division. With only two competitors, both of whom posted solid rounds of 79 on Saturday, it came down to Peter Beneteau making a 10 footer to save par on the seventeenth, after Zack O’Neil missed his 12 footer, to take a two-stroke lead to the eighteenth. Both players made bogey on the hole to finish an exciting race. Beneteau finished the day with another 79 to best O’Neil’s 81, and to win his first Junior Club Championship.

It was an exciting weekend, filled with great shots, great putts, and some great beer in the clubhouse afterwards, as the winners celebrated their victories. Thanks go out to all of the volunteers and the members committee who always strives to make this annual event a joy to play in.

– by Derek Baker
(I would like to take a moment here to thank Derek for his great work in writing up such informative yet entertaining articles for Camden Braes. Creative and detailed … your dedication to the club and your enthusiasm for the game and for the people here is appreciated by everyone! Thank you Derek!)