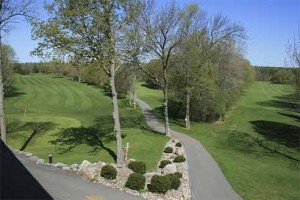 Margaret Wolfram, partnered up with her husband, Herb Wolfram to build a golf course where they could work together and build a business and a family. The course was completed and first played on July 1st, 1976. Margaret, originally from Scotland named the course Camden Braes Golf and Country Club. Camden came from the quaint little village just north of the club and Braes meaning gently sloping hills from her native land. Margaret also proceeded to name each hole with words common to the Scots and not so common here in Canada. Below are a few spring photos of the course and the hole names and explanations. Remember when reading the names to roll your “r”s!
#1 – KILBRIDE 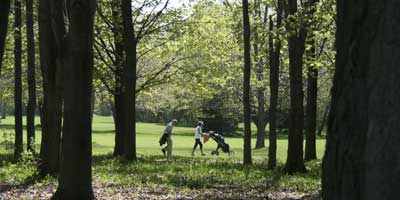 Named after the old village of East Kilbride in Lanarkshire, Scotland. Cobblestone streets lined with ancient stucco homes, some still with thatched roofs, it is like a town from one of Dicken’s novels to this day. Margaret was born in East Kilbride and family live there today.
#2 – KELPIE

Water demon or spirit. Ah, need we say more? The pond to the left seems to have a spirit that pulls the ball into the water… or some might say! It certainly isn’t the fault of the golfer the ball goes into the water!
#3 – THE BRIG

Meaning the bridge. Although there are many bridges on the course, the one on #3 has a stone wall reminiscent of the stone walls in Scotland. Being a very talented mason,Herb gathered field stones off the course and used them to build this wall around #3 tee.
#4 – THE OXTER 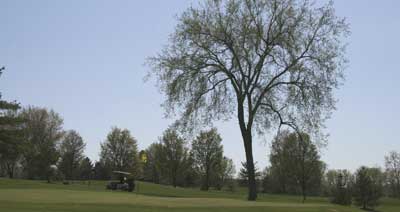 Here’s an interesting one! The Wolfram children grew up never knowing anything else but the oxter when referring to the armpit. Imagine the fun at school the first time we used this word! So, #4 is called the Oxter because of it’s gentle rolling curve to the left as you hit your tee shot and it’s dip just before the green where a stream runs through, not to mention it’s just a fun word!
#5 – THE TROSSACHS 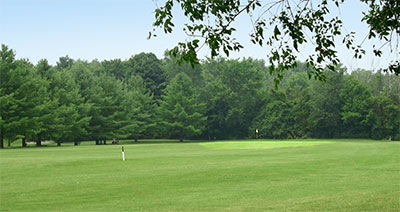 This is named after an area in the highlands that is very beautiful with herds of deer in it’s glens. Sporting a huge variety of trees and shrubs (the large blooms of rhododendrons for instance) and salmon splashing in the streams. # 5 has it all, a babbling stream gurgling through, many mature trees lining the fairway, and deer and even bear have been spotted at the very northern end.
#6 – THE LOCH

A pond or lake, very aptly named as this fairway has a the largest water hazard and I swear old Nessy has swallowed up many a ball over the years. Home to a family of Canadian Geese there is always a view to enjoy walking this fairway.
#7 – CATKIN

Cathkin Braes Golf Club, Lanarkshire – where Margaret’s Uncle Hamilton Frame played. He was the first person to show Herb how to hold and swing a golf club. Linda and Jamie golfed Cathkin and were joined up with a couple of rough highlanders. During the introductions one fellow introduced the other as “Auch then, this ere’s me yung freend Stewart, he’s 89 yers auld “. I’ve never seen such bramble and heather…not fun to golf out of!
#8 – WEE BEASTIE – SMALL ANIMAL 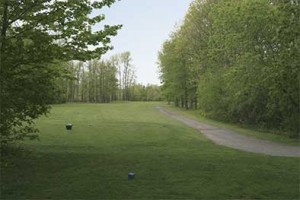 Now, Mom used this a lot as we were growing up as she referred to little mice scurrying through the fields, the squirrels scampering in the trees or one of us if we were misbehaving. Oh, this hole is a scunner (see below) of a Wee Beastie with the huge trees on either side grabbing for the ball in flight and the pond on the left sucking in the ball if it makes it past the trees!
#9 – BIG BRAE

Brae is a gently sloping incline. I am sure many would argue the “gently” part after walking 8 holes and having to hit their ball off the face of this “cliff”. Once a dirt and rock bluff, Herb pushed earth up and seeded grass for a much more interesting if not challenging hole.
#10 – BEN CAMDEN – BEN MEANS MOUNTAIN 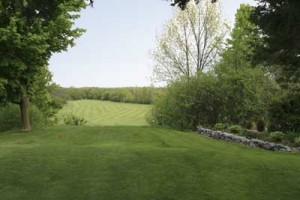 The tee on number 10 is high on the edge of a cliff and gives you a wonderful view of the course. It also makes your drive go farther; or at least it seems so.
#11 – BAW-BEE – SMALL CHANGE – COINS 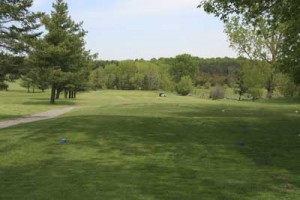 Well, this was “no small change” when we built the course. The Pipeline came through as we were creating the course and we had to shorten this hole or not open at all. Not opening was not an option so, the hole was half the length it is today and you can still see where the old green was as you walk down the fairway.
#12 – SPURTLE – STIRRING STICK

Wooden round, straight stick used in cooking to stir (the morning porridge) as seen above. The top spurtle is being used by it’s 4th generation! Jean Gillan was the first to use it, Margaret Wolfram stirred the family porridge every morning, Linda Wolfram Fraser inherited it and Christine and Bradley are now mixing things up with it! In Scotland, spurtles can be purchased in every little village and town as a souvenir, with the towns name burnt into it. The middle spurtle is from Ayr, Scotland, where Linda was born. A spurtle came to Margaret’s mind when naming the holes for a few reasons. The first being every morning as she stirred the porridge with the spurtle above, Margaret looked out of her kitchen window onto 12 fairway and green. (Of course this was before the trees grew to block the view from the family house. Another reason; there aren’t many straight fairways, this may be the straightest on the whole course. And then of course spurtle rhymes with turtle and there are always turtles in the stream and pond beside the tee. The name just sounds great…try saying it and roll the “r” when doing so.
#13 – SCUNNER – ANNOYANCE 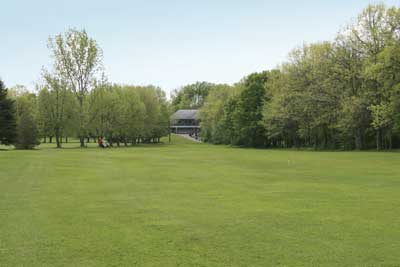 Used when a person is frustrated “Oh, what a scunner!” or “Oh, (drat) scunner my ball landed in the bushes again!” This is a fit name because although the fairway is amply wide, one often seems to end up in the woods enjoying the trilliums or gurgling brook while searching out the ball. Above you will see the view from the middle as you first look back towards the clubhouse and then, as you look north you will see the green.
#14 – THE BURN – IS SCOTCH FOR STREAM

Going across the fairway on #14 is a sparkling brook which is home to turtles, geese, ducks, fish, and even our otter. Once you arrive on the green (one of the largest greens at Camden Braes) you have a great view of the course all the way to the clubhouse.
#15 – SHIELING – ROUGH SHELTER, USUALLY FOR A SHEPHERD 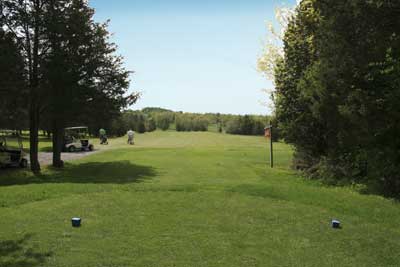 Ah, behind this tee once was a Maple Sugar Shack, or at least that’s what we called it as kids when we would play back in the woods in our brilliant”fort” where the “bad guys” could never get us and the lilac smelled the strongest! This is a photo of the old Sugar Shack before nature took it back.
#16 AULD BRAE – OLD SLOP OR HILL 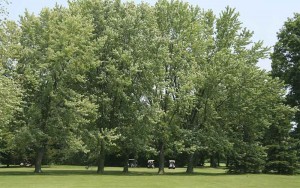 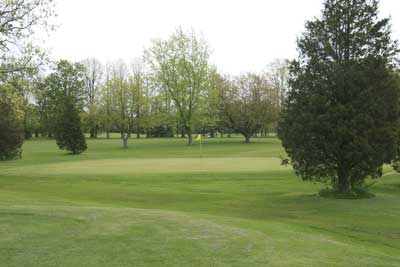 Near this green once was the ruins of an old stone home that had burnt down. As children we would rummage through the old rubble and find broken china, metal pieces, and interestingly enough quite a few broken toys. This is a short hole, a par 3 and so it was thought to be appropriate to call it The Bairn after it’s size and it’s history with the toys.
#18 – BRAW LADDIE 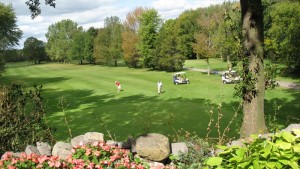 Handsome or good looking laddie (boy or man), and as you finish up your game and walk towards the 18th green at Camden Braes you are struck with the magnificent clubhouse Herb Wolfram designed and built with his own two hands. This millwright from Austria who came to Canada with very little, and not speaking any english has left a legacy that everyone can be proud of.